All the ICC Women's Championship games have now been concluded, as has the ICC WC Qualifier tournament, with India, South Africa, Pakistan and Sri Lanka making it to the World Cup in June, here in England, as expected. There are no more scheduled series to be played before the Women's World Cup, although there are rumours of India touring South Africa in April as a warm-up series.

Be that as it may here are the current rankings...

India got through the WCQ unbeaten and have therefore improved their ranking in our ODI Team Ranking table. They have moved up from third to take second place from England, as England's points tally dropped slightly as games over four years ago were removed from the calculation.

India have now won their last 13 ODI games on the trot, starting at Hobart in February 2016 against the Australians, and then whitewashing the Sri Lankans and the West Indies, before their successful WCQ campaign (six wins), but the last 12 wins have all been on the Indian subcontinent. Conditions in England in June will be very different.

Australia and New Zealand fought out a tough three match series in New Zealand, with the Aussies just coming out on top, having been 1-0 down. It means that they retain their unbeaten 17 year run in the Trans-Tasman competition. The Kiwis have not won a Rosebowl Series this century! It meant the Kiwis stayed in fifth spot in the table, and the Aussies retained their position at the top, although their win percentage has slipped below 80% again.

South Africa's two losses to India in the WCQ tournament means that they stay in sixth, with Pakistan and Sri Lanka behind them.

Ireland's poor run of results in the WCQ (they only managed a win against Zimbabwe), means they slip to the bottom of the table below Bangladesh, who beat them in the WCQ. Neither team will be in the 2017-2021 Women's Championship, so there chances of improving their performances against better opposition will remain low.

All the ODI games for 2016 have now been completed, and the current WCB ODI Team Rankings Table looks like this

Australia still head the table and have upped their win percentage to over 80%, having beaten Sri Lanka 4-0 and South Africa 4-0 (with one match tied). They remain unbeaten in their last 11 ODIs, but will face New Zealand next in February as they warm-up for the World Cup.
England have taken their win percentage over 70% to secure their second place in the table. They had a tough series in the West Indies which they won 3-2, and then whitewashed the Sri Lankans 4-0.
The Windies loss to England and 3-0 drubbing at the hands of India mean that they slip from third to fourth in the table and that India, who have failed to qualify automatically for the Women's World Cup in June next year, leapfrog them into third place. Had India played their scheduled ICC WC series against Pakistan, you suspect that they would have clinched the fourth spot they needed to qualify ahead of the Windies. Instead they head to Sri Lanka in February to the WWC Qualifier. They will be favourites to win that tournament and qualify for WWC 2017, alongside South Africa, Bangladesh and Ireland.
New Zealand beat South Africa 2-1 and then drubbed Pakistan 5-0 to close the gap on the West Indies. If they can pick up a couple of wins over close rivals Australia in February they could head into the WWC above the Windies in the WCB ODI Team Rankings, which is perhaps a fairer reflecton of their current status in the game.
South Africa finished their ICCWC campaign with tough series against New Zealand and then Australia. They picked up a win against the Kiwis and tied a classic match against the Aussies, but the six losses that went with those games meant their ranking points went down. However they have proved that they are a tough side to beat and they will go into the WWC (assuming they qualify) with high hopes of making the semi-finals.
Pakistan and Sri Lanka have had a tough time in the ICCWC, but the opportunity to play the top sides in the world more regularly seems to be inspiring them to put more resources into the women's game in their countries. Both will expect to progress to the WWC via the WWC Qualifier, but the likes of Bangladesh and Ireland may give them a run for their money.

With the Women's World Cup looming on the horizon (June/July 2017 in England) all of the eight teams in the ICC Women's Championship are involved in their last two series of ODI games before the end of 2017, with the aim of making the top four and automatic qualification for the tournament. 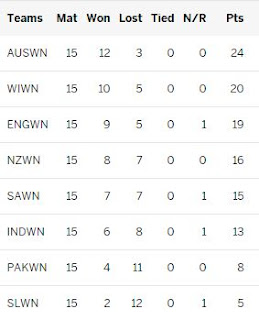 And here are the series to be played :-

Most of the teams are playing as many ODIs as they can cram in to the series, although only the designated three games will count towards the ICCWC table.

And here are the current WCB ODI Team Rankings to the beginning of September. Australia are still top, but England have closed the gap to second. West Indies are closing in in third and India have jumped over New Zealand into fourth, but in the next few months there could be many changes as teams battle it out.

Australia lost the final ODI of their three match series with India, but still completed a 2-1 series win, which maintains their position at the top of the WCB ODI Team Rankings table. The monthly reworking of the games included in the calculation (excluding games over four years ago) has meant their score has actually dropped from 503 to 472, but only New Zealand, South Africa and Bangladesh's points total increased in the monthly reshuffle.
India have dropped from fifth to sixth in the table with South Africa holding a one point advantage over them, although they are in the middle of a series against England, which could cost them points and once again promote India to 5th spot. India also have a home series against Sri Lanka to look forward to starting on 15th February.

New Zealand's comprehensive 5-0 whitewash of Sri Lanka has earned them 32 points in the WCB ODI Team Rankings table, which has meant they leapfrogged over South Africa and India from 6th spot in the table, up to fourth. But their next series is against table-toppers Australia in February, where wins might not be quite so easy to come by.

The table below includes the results from the recently completed West Indies v Pakistan series, won 3-1 by the West Indies. West Indies have improved their WCB score from 326 to 336 to enhance their current third position. Pakistan have gone up from 189 to 195 courtesy of their win in the first game of the series which gave them 10 win & bonus points. The current table therefore stands like this.